Currently NO SHIPPING to NZ due to mail restrictions. Please click for more info on international shipping

Hello everyone! First of all, I'd like to say THANK YOU to everyone who has supported me so far! You guys inspire me every day to keep working hard and making new things! I'm sorry that the site has been kind of neglected; I had hoped to start listing more items for sale, make a whole bunch of new videos for the YouTube channel, and a ton of other stuff that still hasn't happened yet, mostly due to my "real" job's work schedule. I'm really hoping that I will have the time to do a lot of those things I want to do over the winter break!

First of all, I want to announce that Summerbird has an official domain now! The old Shopify website address will continue to work, but if you'd like to change your bookmarks, the new domain is www.summerbirdbjd.com !

The second site update that I'd like to point out is that I'm now using Disqus for blog comments, since the built-in commenting features were absolutely terrible! Now I'll be able to reply to comments directly in nested comment threads, you'll be able to receive notifications and explore blog articles more easily, and hopefully everyone will be happier!

Please don't let the Disqus format scare you away from commenting! I know sometimes the Disqus login put me off of commenting on other blogs, but now there are bunch of social login options, and a "Guest" login feature that doesn't require any login at all! Just check the "I'd rather post as a guest" box after you type your name and you can comment without having to sign up or sign in.

I hope the new  system will make commenting easier and more fun for everyone.

Everyone who ordered Viola in the first pre-order has been so patient and I just want to say thank you so much for that! 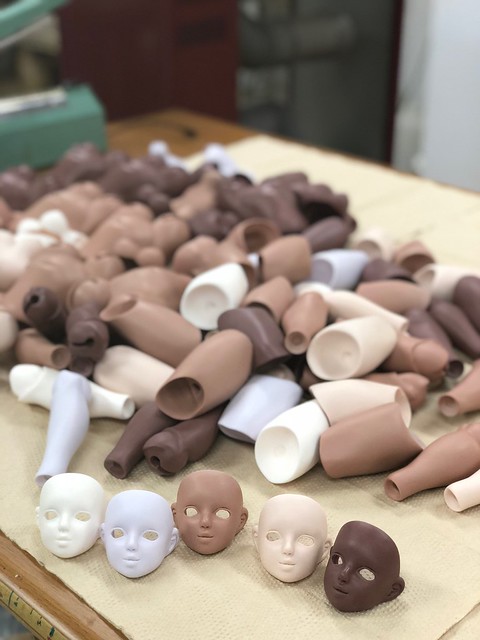 I've been in contact with Haru (the casting company), and I'm hoping that the dolls should start shipping to me in early January. Unfortunately since Haru has to make a 2nd set of molds, it's making the casting go a little slower. The shipments are going to be split up, so I'll only receive about half of the dolls in this first shipment, and the rest of the dolls from the 2nd molds at a later date.

I'm still not sure when the second shipment of dolls will be sent out to me. But I'd like to start shipping the dolls to you guys ASAP, even though they all won't be going out at the same time.

I've finished sculpting a new face for the Viola body! Her name is Mystique, a fantasy-type head with half-closed eyes and elf ears, and magnetic attachments for a number of different head adornments. Currently sculpted are: Oni Horns, Goat Horns, Unicorn Horn, and a Giant Forehead Eyeball. I'm planning on making more horns and adornments in the future, too. This faceplate was made specifically to fit a Unoa headback, so she will also fit on the Viola headback but doesn't have any cross-compatibility issues like Viola does. (I'm planning on modifying the Viola face and headback before the next preorder to be 100% Unoa compatible).

I'm planning on offering this new Mystique head along with the Viola head (and maybe also a Viola Dreaming version) in the next preorder, some time in Early 2018.

I'm planning a giveaway for the New Year! It will be a joint YouTube and Instagram giveaway, with two OOAK Mystique faces & horn sets, and a few pairs of eyes as prizes!

I'll post rules and entry guidelines soon, but I'll also be collecting questions for a FAQ video (or series of videos, if needed) so in the meantime start thinking of questions you'd like for me to answer. Don't worry, this won't be necessary for entering the giveaway, but I wanted to give you some time to think about it!

I hope to have more news for you very soon! Everyone have a safe and happy New Year! ♥